BALLET T objectives :
- To promote the choreographic cultures with a joint artistic project made as accessible as possible
- To encourage the creation of a cross-border Malandain Ballet Biarritz troupe
- To promote the dialogue between artists and audiences on the cross-border territory
- To create an unprecedented common repertoire shared between San Sebastián and Biarritz
- To initiate cooperation between the cultural institutions located on the cross-border territory

Following the positive results and a new development project, the Malandain Ballet Biarritz and the Teatro Victoria Eugenia de Donostia / San Sebastián have renewed the agreement on objectives and finances for a term of five years. This agreement relates to the cultural cooperation project "Ballet T" that has been conducted in Northern and Southern Basque Country since 2007 thanks to the support of the European Regional Development Fund (ERDF), which was initiated and developed by the France-Spain-Andorra Cross-border Cooperation Operational Programme. Biarritz and Donostia / San Sebastián city officials who have been supporting the project since it began have also signed the agreement.

The signing took place at the Teatro Victoria Eugenia on Thursday 12th of March in presence of Michel Veunac, mayor of Biarritz, and Juan Karlos Izagirre, mayor of Donostia / San Sebastián, as part of dFeria, an unmissable event organised every year by the Teatro Victoria Eugenia. This event aims at displaying the latest creations from Basque, Spanish and international artists to six hundred professionals working in the performing arts sector. A ten-minute-long documentary recounting the activities of Ballet T and realised by Morgan Creativos was shown on this occasion.

With Arnaud Mahouy  as dancing master, accompanied by the Malandain Ballet Biarritz’s dancers, participants celebrated in an original and friendly way "dance together" by being invited to cross the border between the auditorium and the stage, and to experience the show with a unique perspective.

After an initial warm-up and learning of choreographic phrases, participants were able to express in a festive atmosphere and live a unique experience on the Victoria Eugenia Theatre scene of Donostia / San Sebastián with of all our dancers.

In the framework of the Estivales 2018, Malandain Ballet Biarritz will propose 5 performances of Noah in Donostia/San Sebastián and in Biarritz.

- In San Sebastián, at the Victoria Eugenia Antzokia at 8pm, the 31st of July and 1st of August

And what if dance was inspired by the story of Noah's Ark and the Flood ?
Thierry Malandain has accepted the challenge and created an ode to mankind.

Tuesday 31 July on this link

Wednesday 1 July on this link

Wednesday 08 August on this link

Thursday 09 August on this link

Friday 10 August on this link

Artistic and societal or environmental commitment, a familiar refrain... Yet, the urgency and the intensity of environmental issues is ever increasing, among hundreds of other issues, global warming, which affects the planet and the coastlines with coastal erosion, flooding, drinking water sources polluted by sea water, rising water levels, warming of sea temperatures causing instability in ecosystems....

As a coastal region, the Basque Country (where Malandain Ballet Biarritz is located) is directly concerned as far as its lifestyle, businesses (tourism, blue economy, etc.), culture, etc.

Consequently, in conjunction with its 2017- 2019 artistic project, Malandain Ballet Biarritz with Victoria Eugenia Antzokia de Donostia/San Sebastian and the Surfrider Foundation Europe (NGO), have undertaken an “Art & Environment” programme to raise public awareness concerning the importance of coastal conservation. Beginning with a performance, an artistic gesture, like a “hummingbird”, the “Uhain Berria” project participants will try to raise public awareness and even change behaviour, as trivial as that may seem. The Noé ballet choreographed by Thierry Malandain is the first milestone of this initiative. In 2018, Martin Harriague (Artist in residence at the Biarritz CCN) created Sirènes and other creative artists will also take part in this project.

Concerned due to its local roots and aware of the interdependence connecting all of us, with the watchful eye of its public education, Malandain Ballet Biarritz is thus committed to coastal conservation via the Noé and Sirènes ballet performances based on its experience raising public awareness and cultural outreach. 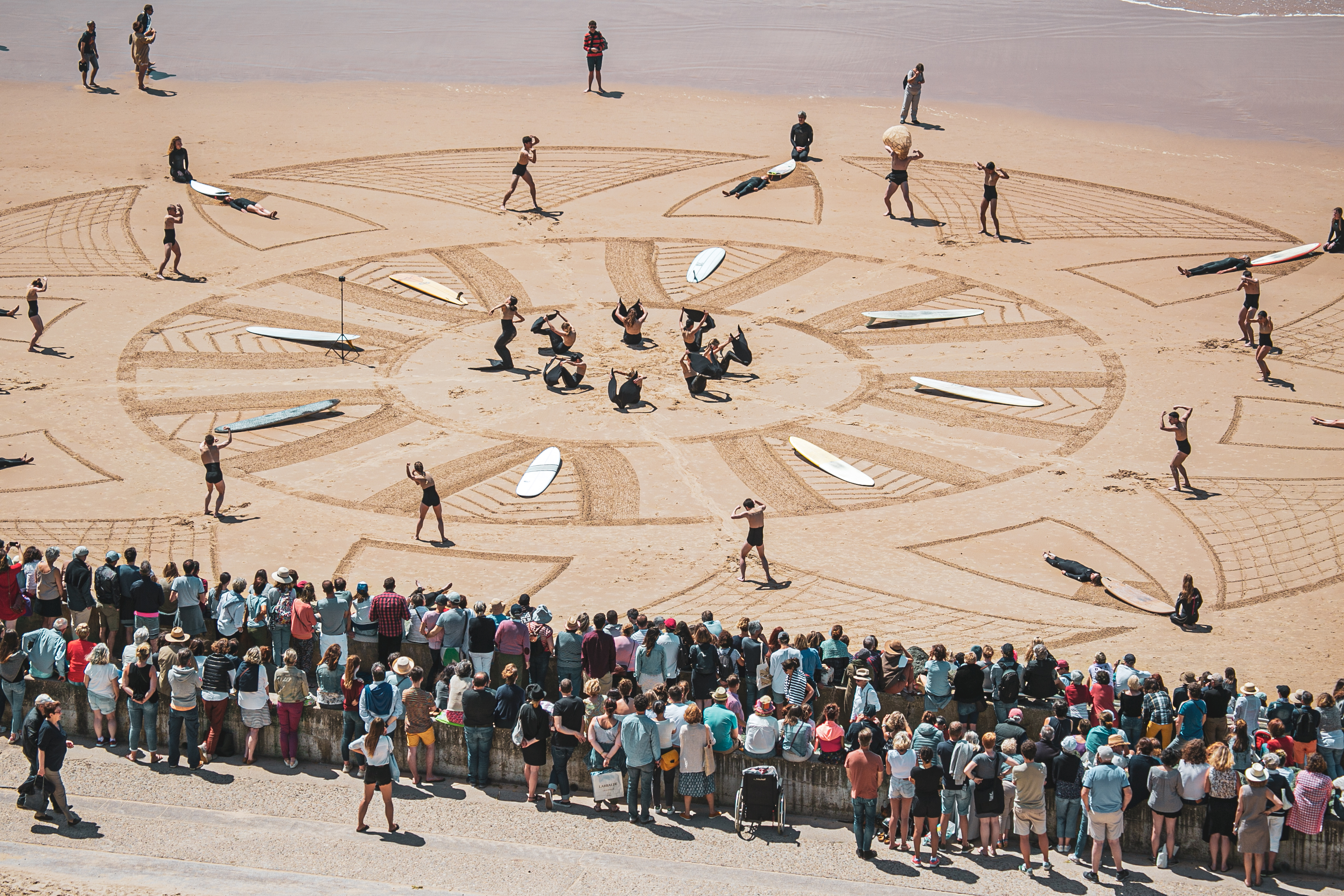 ASTEROIDEA is an experimental performance art piece created to celebrate World Oceans Day on June, 8th 2019, in Biarritz, Côte des Basques. It is the fruit of a new collaboration between environmental NGOs, a neoclassical ballet company, and numerous volunteers. Together they presented a poetic and militant piece of art mixing the elements, dance and surfing, choreography and beach art, video, photography, instantness and urgency...