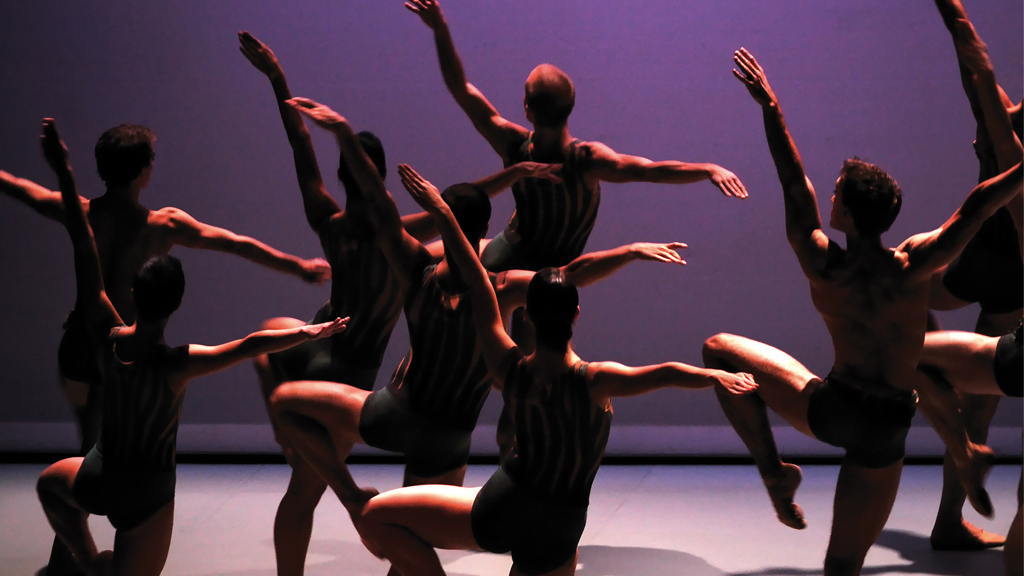 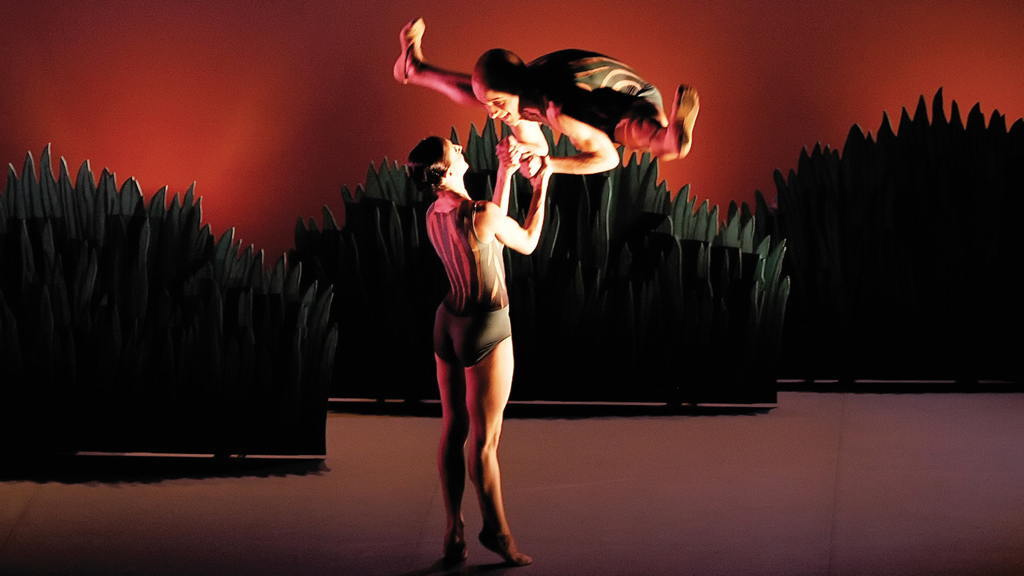 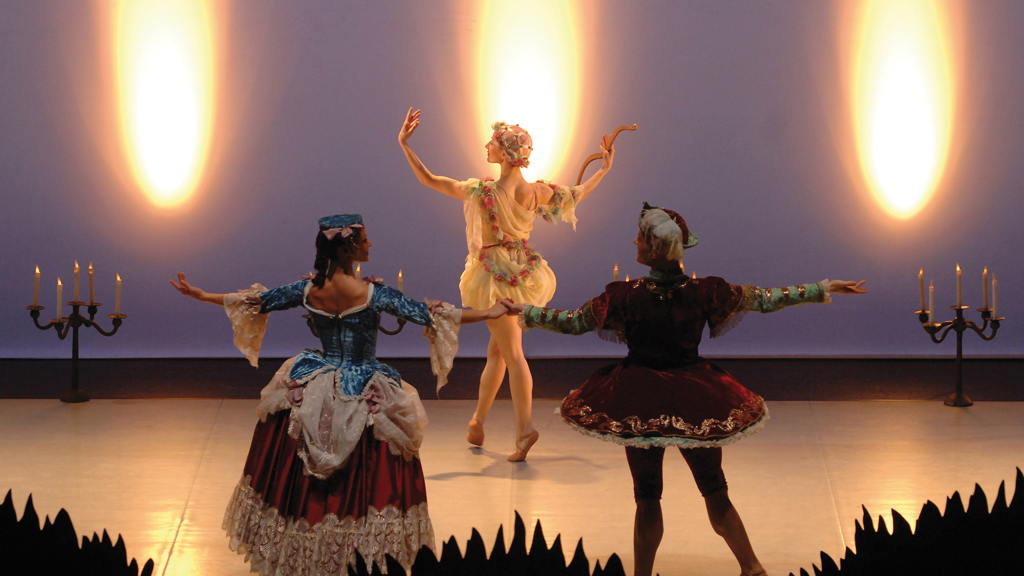 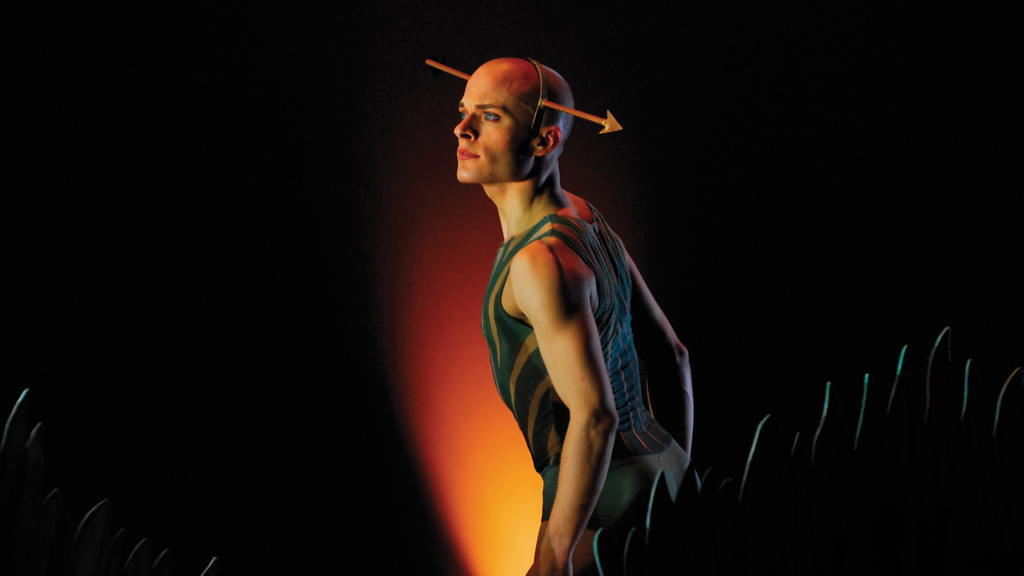 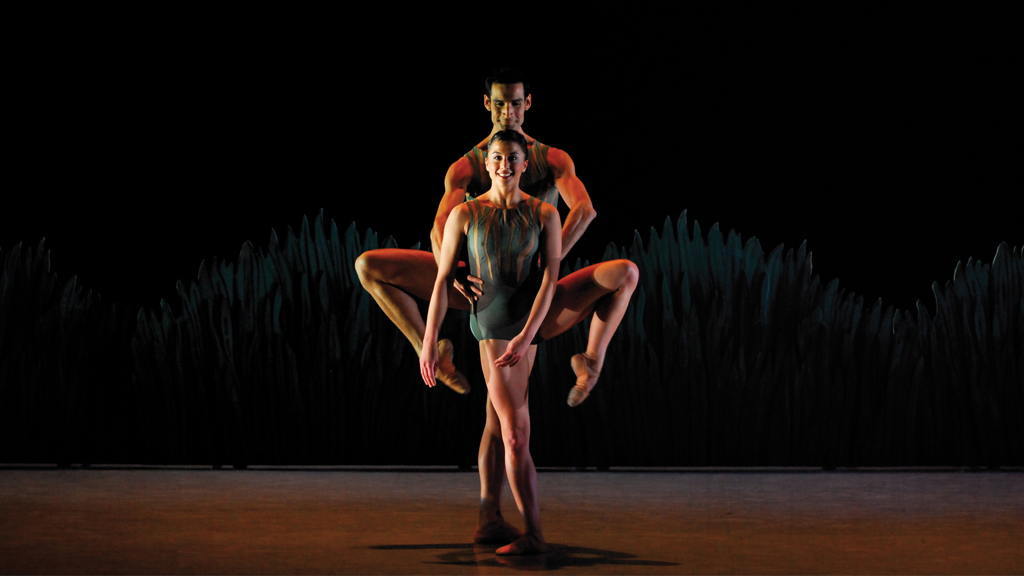 Les Petits riens, created in Paris by Jean-Georges Noverre in 1778 and based on young Mozart’s music, is a pastorale in the mode of Anacreonte, the Greek poet. A poetic genre that sings the delights of love rather than its pains. Cupid, sheperds, sheperdesses and birds, ramble about in a pastoral setting, with a few sheep thrown in, which we added to echo Marie-Antoinette, the author’s protector.
There was no story to start with, apart from a series of plots about Cupid’s games and jokes. But the sources are not very clear since. Noverre made three different versions of this work. As to the music, which was found whithout any indication of sequence, its structure remains haphazard. It does not matter much as the ai mis not to retrieve what Noverre himself considered a light-hearted piece, but rather to offer variations on a frivolous theme and have fun from one dance to the next while enjoying Mozart’s music.

duration of the entire ballet 25’
ballet for 16 dancers

« […] As a whole, the piece was splendid, a result obtained thanks to elements suceeding each other to a lively rhythm, going crescendo from the beginning to the end. The dancers, convincingly using their bodies in an expressive manner, gave its definitive character to a work which caught the imagination of the audience, providing it with a contemporary vision of the 18th century. […] All the dancers brought expressiveness and physical virtuosity to their peaks. They embarked on the quest of space with talent that surprises me each tima I see the Ballet Biarritz, a solid company directed with great mastery by Thierry Malandain. »

El Diario Vasco, Idoia Lecumberi, March 2006
« […] Malandain excels in this kind of oblique references to the history of dance and to the audience. […] »

Les Échos, Philippe Noisette, March 2006
« A truly refined choreography, « Les Petits riens » is a contemporary oblique reference to the 18th century. Thus, the elegant dances of the past served as a pretext for a choreographic narrative in which the word « entertain » became an order despite the difficulty to stage the score. [...] »

Il Giornale Di Vicenza, March 2006
« Malandain gave us a masterpiece of freshness sprinkled with strokes of humour – somtime of unrestrained joy – in which the athleticism of the dancers, who perfectly performed in the style of their master, was never at variance with the lightness and immanent grace of Mozart’s music. […] While one can still compare some aspect of the creation with a detail already seen in Forsythe or Preljocaj ballets, the originality and cohesion of this new choreography Malandain made working in unison with music, by wonderfully emphasizing the physical attributes of his dancers, anchored the growing success of the troupe on the best stages worldwide. »

La Semaine du Pays Basque, Alexandre de la Cerda, March 2006
« The year of Mozart could not have wished for a choreographer as audacious as Thierry Malandain to capture the very essence of « Les Petits riens » with wit and spirit. Like in many of his creations, the Ballet Biarritz director produced an ever precise art of seduction between bodies and music. »

Ballettanz, Thomas Hahn, March 2006
« […] The scenic elements, the surprising lights effects and event the costumes provided a texture in which dance language was more flowing, more evolved, more free and detached from formal links. There were discipline, a pre-conception work and a spatial situation to generate powerfull images, in which each of the participants was at ease with one’s own expressive style. « Les Petits riens » was playful, fresh, sometimes featuring steps seeming to come from a playground, but full of nuances. Amusing and catchy, each scene was a chant of life, with a theatrical game efficiently created. […] »

Artez, Carlos Gil, March 2006
« The dancers alternatively turned themselves into shepherdesses, sheep, little birds and Cupids, flapping their wings and expressing with grace, audacity and humor some truly universal feelings : teasing, the bliss of lovers, their blind certainties. The choreography took a total advantage of the bodies it brought to life. Seduced by the piece as a whole or by Mozart’s music only, the audience smiled at this pretty, funny and original ballet. [...] »

Le Journal du Pays Basque, Kattalin Dalat, February 2006
« [...] A ballet about a ballet evoking ballet within ballet, Malandain’s multiple-faceted play emphasized the fact that stage behaviour and the question of using ballet of action as a means of expression was no more than an anecdote. Far from being an insignificant trifle, the piece was finely performed, well written and gave an interesting foretaste. »

Webthea, Philippe Verrièle, May 2006
« [...] There are few choreographers anywhere who match Malandain’s obvious sense of delight in finding amusing things for his dancers to do and wear – and in playing ingenious theater games with the audience. « Les Petits riens » teased the viewer with constant slumping, angular or contorted anti-classical moves that suddenly, seamlessly blossomed into examples of pristine balletic purity. […] The title « Les Petits riens » translates as « The Little Nothings » (or « Bits of Nothing »), and Malandain made his treatment disarmingly irreverent, impulsive and effervescent. […] Malandain obviously understands the lessons that dance history teaches about the evolution of movement expression. […] »

La Provence, juillet 2007
« Your dance must bring joy and delight and warm the heart of those who gaze at you », said a famous ballet master to his pupils. Never those words turned out to be that true, nord id they find such a deep echo but with « Les Petits riens », a poetic ballet by Thierry Malandain. The piece, singing the delights of live to a score by Mozart, was indeed lively, fresh and light, full of joy and energy ; i had the power to clear by sleight of hand all worries and dark thoughts that might have grasped the spectator’s minds at their entrance into the theatre. Being one with the music, the choreography flowed with an unprecedented lightness, even more since it was puntuacted with jokes and ideas producing a beneficent effect. Needless to say, the highly talented dancers shone with their generosity, joy and pleasure to dance, despite a score fraught with difficulties. A pure moment of delight. […] »

Le Vésinet, J.-M Gourreau, February 2008
« Thierry Malandain, brings ballets back to life whitout re-enacting historical events, but always by endeavouring to express the human passions of our time. A creation experienced like a choreographic escapism in which the precious moves of the bodies were used to tell a subtle and sublimated plot. He is an extraordinary choreographer, an heir to the classical masters. »