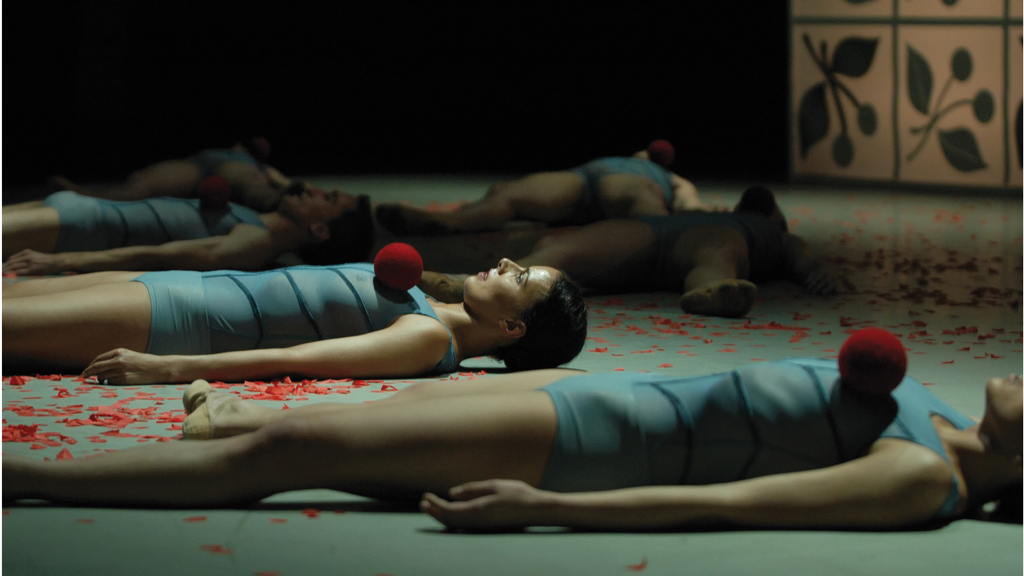 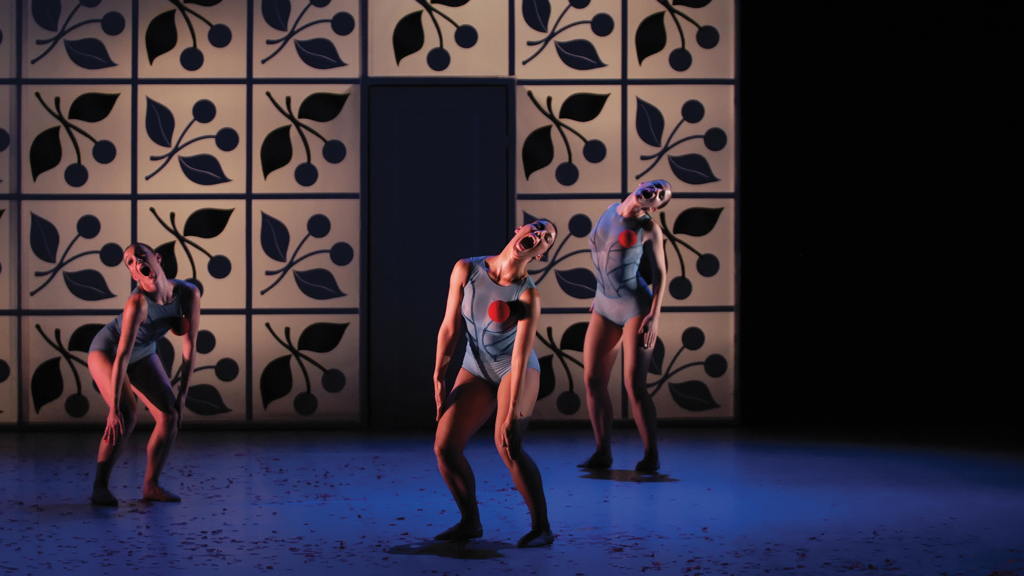 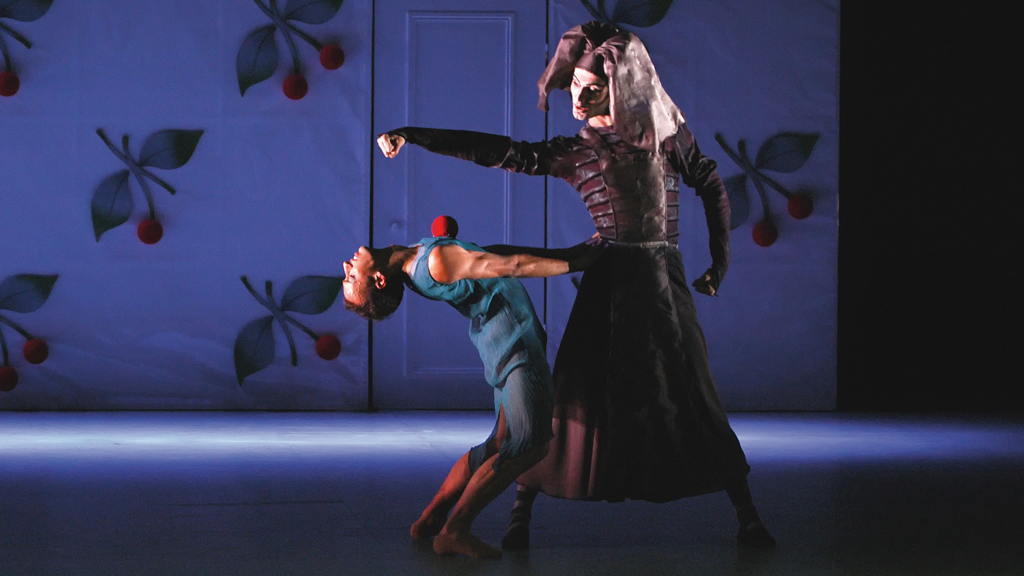 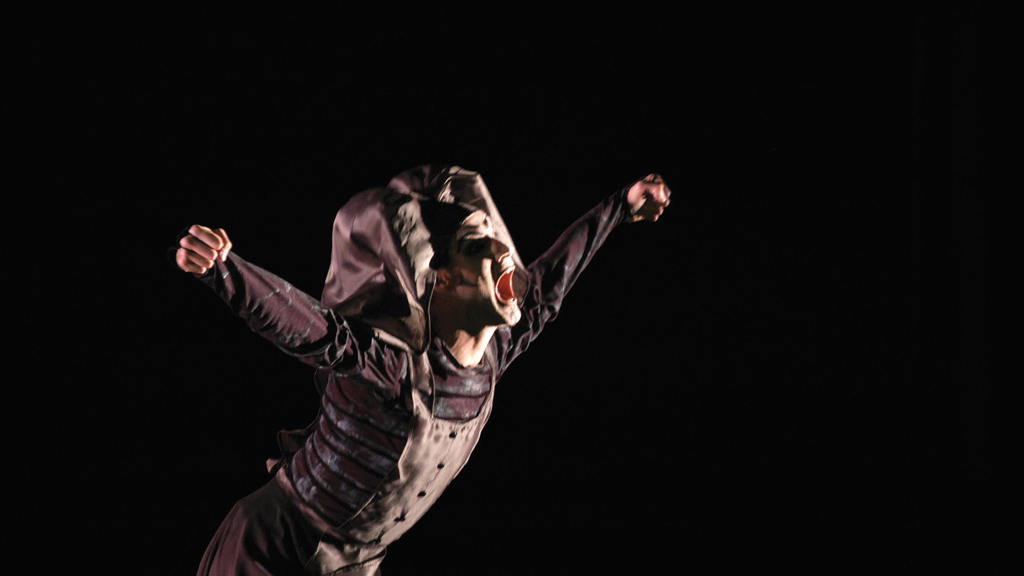 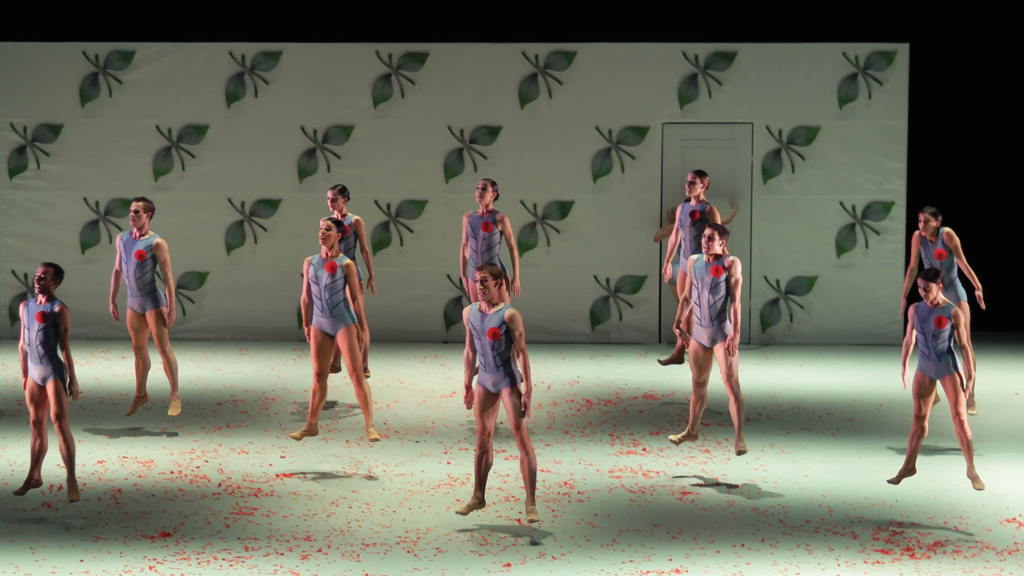 The industrious Ant is a ludicrous and selfish being who embodies the indifference of an inward-looking society. On the contrary, « Cigale » (the Grasshopper) who « had sung her song all summer long » has all the virtues of generosity. In general indifference, she dies and ascends ti heaven like a saint.

Freely adapted from La Fontaine’s fable by Henri Cain, the Divertissement-Ballet by Jules Massenet was performed for the first time on the stage of the Opéra Comique in a choreography by Mariquita on the 4th February 1904.

In scenery reduced to the essential, I substituted the props giving meaning to the plot for balls. Food, devotion and gifts offered by Cigal, the balls symbolize all the exchanges. As for the cast, the character of the Anti s played by a man like in the original version, while the role of Cigale is multiplied and shared amongst all the dancers. As the work moves from comedy and drama, I embrace these genres like in silent movies and « verismo » dramas, adding some fancy to the whole of the ballet.

duration of the entire ballet 45’
ballet for 14 dancers

« The multiplied role of « Cigale » (the Grasshopper) is successively played by all the dancers, facing the saturnine Ant, a kind of introverted cornette-wearing nun, played by the willowy Giuseppe Chiavaro. In a very vivid mise-en-scen, Malandain the Wizard worked on sevral levels of interpretation, turning this fable into a purely symbolic tale. »

Le Progrès, Claudie Léger, November 2003
« No matter the synopsis, no matter how charming, successively elegiac and lively the score is ! No matter the bottle, there was drunkenness ! The choreographer exactly struck the right note with his work mixing tenderness and humour, and the judicious, juvenile, unique and very appropriate scenery. He perfectly developed and mastered a subtle and delicate interpretation of the fable, creating a seductive universe where the green joyful homospheres confront the dark figure of a tall, twited and leggy ant. It must be said that the quality of Ballet Biarritz dancers was a serious asset. »

Lyon Figaro, Gérard Corneloup, November 2003
« Ballet Biarritz asserts itself as a stronghold in cureent dance world. […] Cigale bears the mark of Malandain : the corps de ballet heterogeneously composed of male and female dancers with different physical features thrills by its homogeneity. With a libretto rejuvenated after a century of existence, this Cigale keeps the freshness of a fable about generosity and sharing, but with a modern profundity. »

La Dépêche du Midi, Jean-Louis Dubois, November 2003
« A very dynamic and amusing ballet with very explicit body movements, Cigale uses also exaggeration and caricature to clearly depict the different ballet scenes. In this, we find the personal style of an experienced choreographer. In his version of the fable, Malandain shows us the Ant as an evil and pitilass character. Her grandiose, sharp and somewhat comical movements in the beginning of the ballet reveal little by little a presence that will become gloomy. « Cigale » (the Grasshopper) is, by contrast, a light, bright and big-hearted character, played by thirteen dancers. Malandain goes even further in the reverseal of the fable values and, through the Ant, criticizes capitalism, which not only keeps a hold on all the goods, entirely lacking of solidarity, but also leads to break people’s hearts. This is a song to humanity and an invitation to contemplation. »

El Diaro Vasco, Anna Remiro, December 2003
« The last creation of Malandain delights the eyes, the senses and the viewer’s presence by its pure metaphorical, allegorical and seductive version of La Fontaine’s fable The Ant and the Grasshopper. »

, François Xavier Esponde, December 2003
« Malandain composed Cigale like a stylish parable, departing from the ogirinal synopsis, roughly inspired by La Fontaine fable. […] If this ballet has a moral, Malandain never emphasizes it. His dance has that little knowing and exhilarating smile, enabling him to be serenely serious. He does not like that we say it freshness. It looks like freshness though and, nowadays, it is a precious virtue. »